Tom McLeish was invited last week (November 1st) to hold a seminar on Grosseteste’s colour science  with the University of York’s History of Art Department’s Stained Glass Studies Group.  So here (right) is a stained-glass representation of the Bishop to start with.

Tom, an original member of the Ordered Universe project right from the very early days in Durham, has recently joined the University of York as its new Chair of Natural Philosophy.  Although based in Physics, the role has time allocated to the

University’s long-standing Centre for Medieval Studies, as well, which is now a partner of the project. The Centre is accommodated in Kings Manor, the former abbot’s house of St. Mary’s Abbey (now ruined) close to the Minster, Museum, Library and Art Gallery in the centre of the city.

The natural starting point for the Kings Manor seminar was Grosseteste’s De colore, his treatise, probably from the mid 1220s that develops his natural philosophy of light into a theory of colour.  Early in the Ordered Universe project’s life we had studies this jewel of a treatise, and found it to be structured in a highly mathematical way. It constitutes the first description of an abstract three-dimensional space for colour. 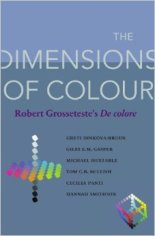 These insights, together with a fresh edition and translation and interdisciplinary commentary, formed the first ‘pilot’ publication from the project, Dimensions of Colour, back in 2013. in only 400 Latin words, Grosseteste carefully identifies colour as the effect of light incorporated in a diaphanous medium, and describes three ‘axes’ along which colour can vary independently. Crucially, two of these depend on properties of light and one on the material within which the light dwells – its ‘purity’ or ‘impurity’. This is turn is related to the quantity of ‘earthiness’ (earth is the only non-translucent of the four Aristotelian elements). The final paragraph of the treatise contains an invitation to try out making colours with different lights and materials, and is one of the pieces of evidence pointing to Grossteste’s involvement in the very early stirrings of experimental tradition.

York stained glass scholar Sarah Brown, who led the scholarly work behind the recent 10-year restoration of York Minster’s Great East Window, was led to think about glass-making right away by this paragraph. Might Grosseteste have witnessed the manufacture of glass?  If so this would not have been in England, but in northern France. Does a thread from light through colour and glass constitute another line of evidence that leads to a presence for him in France in the early 13th century?

The discussion also moved onto lenses and lens making in that era, of which no doubt there will be more news on this blog at a future date…