Members of the Ordered Universe team will be in California in January 2019 for the Napa Lighted Art Festival, bringing our favourite blend of medieval history, modern science, and mesmerising art to the west coast of the USA for the first time.

This is the third in a series of posts designed to tell you more about each of our events at the Napa Lighted Art Festival and how you can get involved. 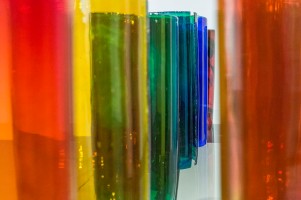 Illustrating the nested spheres of light created in Grosseteste’s cosmogeny

Light, Science and Art. What happens when the wonderful complexities of light in all its forms, as understood by modern science meet the intricacies of modern art? Brian Tanner, leading physicist and winner of the Gabor Medal, and Colin Rennie, glass artist and academic, both from the UK, will take you on a journey from X-Ray Imaging via Radio Astronomy to 3D glass sculpture inspired by the science of the rainbow. And not just any scientific theory of the rainbow. This one is a creative fusion between 13th century European theories and modern vision science. Light, seen and unseen, in its qualities and potentials, unlocks the universe. So too light unlocks artistic inspiration and experience – as you will find out.

This event is part of the Napa Lighted Arts Symposium Series and is hosted by the Parks and Recreation Services Department, City of Napa.

Professor (Emeritus) Brian K. Tanner studied physics at the University of Oxford graduating with a doctorate in 1972. Brian is best known for his research and business applications of high resolution X-ray diffraction and imaging. He has worked at the Department of Physics at Durham University since 1973, where he was made Professor of Physics in 1990 and was the University Dean of Knowledge Transfer and Enterprise from 2008-2016. In 1978 he co-founded Bede Scientific Instruments Ltd, purchased in 2008 by Jordan Valley Semiconductors, which itself is now part of the Bruker group. A member of the research team that led another spin-out from Durham University, from 2003 to 2015, he was Chairman and then Nonexecutive Director of what is now the Kromek Group plc., with facilities in the UK, Pittsburg and Rivergreen CA. Brian is a Chartered Physicist, a Fellow of the Institute of Physics, Fellow of the Higher Education Academy, and Fellow of the Royal Society of Arts. He was jointly awarded the 2005 Barrett Award of the International Center for Diffraction Data. He received the Queen’s Award for Enterprise Promotion in 2012. In 2014 the Institute of Physics awarded him the Gabor Medal for distinguished work in the application of physics in an industrial, commercial or business context.

Colin Rennie is an artist and teacher, works predominantly with blown and hot formed glass metals and other materials, the work is a blend of digital design and visualization processes with traditional craft practices. Rennie’s work has often sought to respond sculpturally to a range of scientific ideas, discoveries and theories, previous works have often included models of ideas and invented apparatus that could be part of the process of discovery, for Rennie the making process is integral to the concept. Rennie lives and works in the northeast of England as Senior Lecturer, Artist and Researcher, specializing in Hot Glass and Digital Crafts, and Drawing at the University of Sunderland.